The Pista Ciclabile is a 24 kilometer long bicycle path that leads from Ospedaletti to San Lorenzo al Mare. If you want to enjoy a relaxed but active ride with interesting, beautiful and tasty stops, this tour is must-do. In contrast to the many challenging, rough mountain bike trails that lead you into the hills of the inland, this route is comfortably flat and fun for everyone. All kinds of bicycles (street bikes, mountainbikes, family bikes, children's bikes and e-bikes) can easily be rented at the boulevard in Ospedaletti, close to the starting point of the Pista Ciclabile.

The cycle path was created after the old railway line was relocated, which initially ran along the Ligurian coastline from 1872 until 2001. Until the beginning of the twentieth century, this connection was mainly used by rich Italians, Britons, Germans and Russians who spent their holidays around here. At the time of the Second World War, the railway was mainly used for military logistics, followed by a glorious period for tourism in the sixties. Subsequently, the use decreased, which ultimately led to the closure of the train connection. 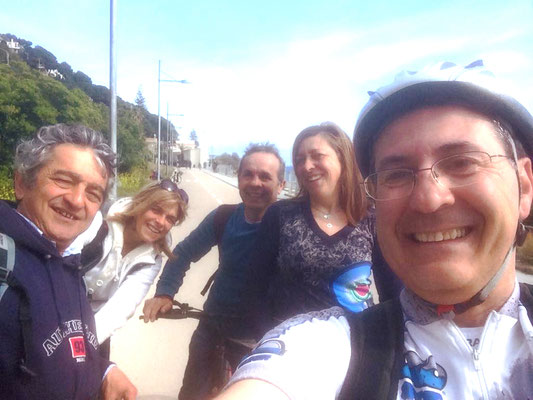 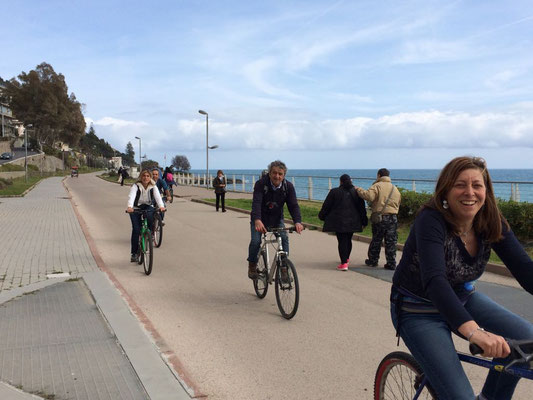 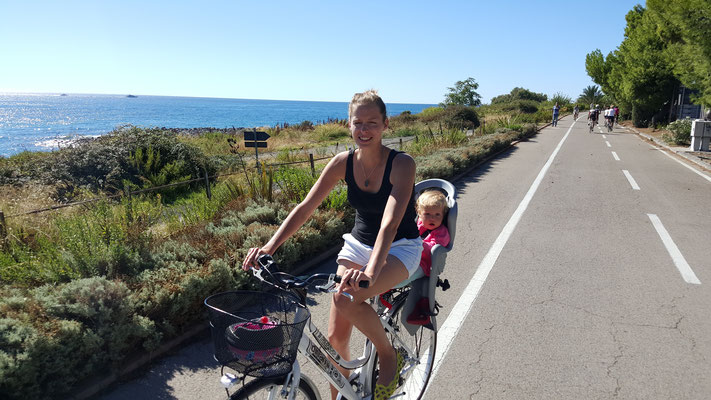 In 2004, the organization Area 24 revived the route, by creating a panoramic bicycle and walking path on the site of the old railway. It's perfect for strolling, walking, rollerblading, running, cycling and horse riding. From the start and end point you will pass the beautiful city of Sanremo, Villa Nobel and the picturesque villages of Arma di Taggia, Santo Stefano al Mare (with the impressive Torre Saracena), Riva Ligure, Cipressa and San Lorenzo al Mare. 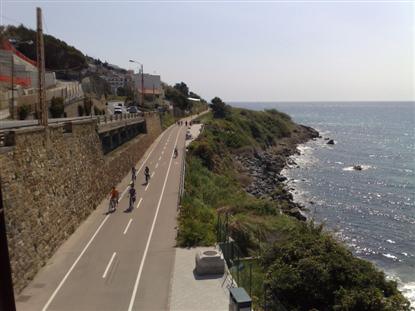 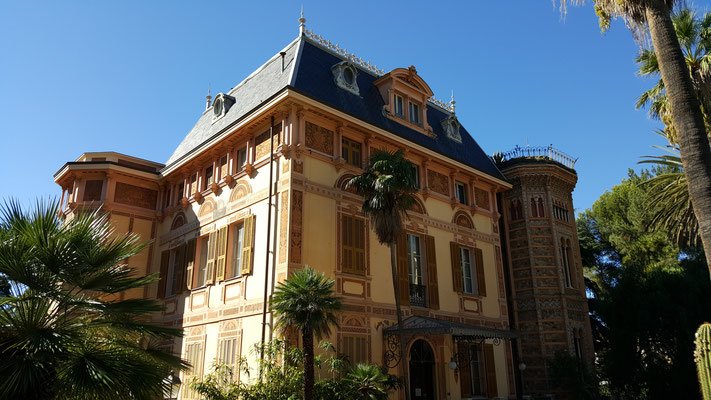 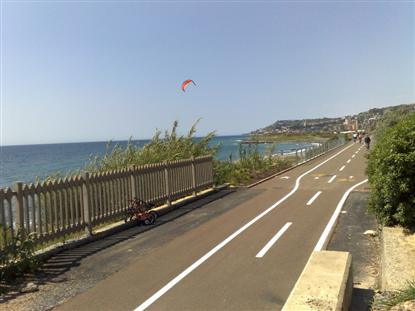 The route is decorated with masses of colourful bougainvillea and oleanders, that cover the high rock walls. The surroundings vary from endless sea views to small beaches (ideal for a picnic or a dip in the sea), from green parks to small villages and agricultural areas. 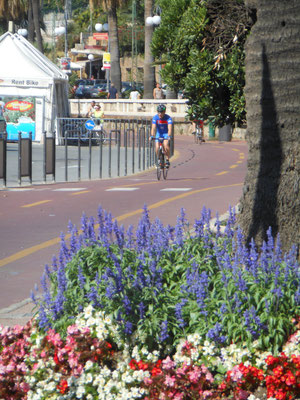 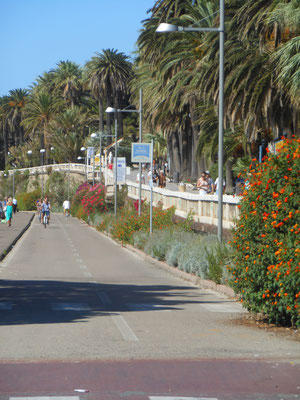 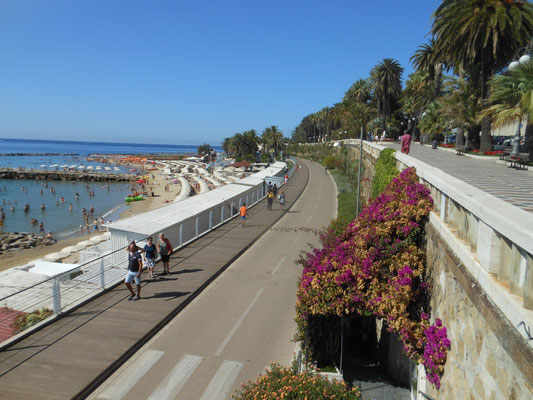 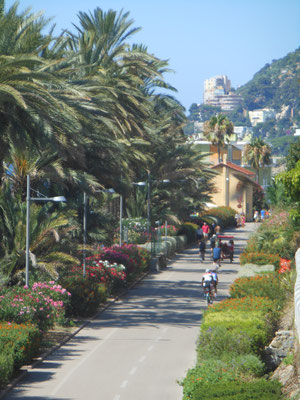 Several times you will drive through short parts the old railway tunnels. This is not only nice and cool on a hot summer day, but also extra fun for the true sports enthusiast. On both the road surface and on signings hanging from the ceilings of the tunnels, you can find numerous historical facts, anecdotes and photos of the classic cycling tour Milan-Sanremo and its famous cyclists and record holders. 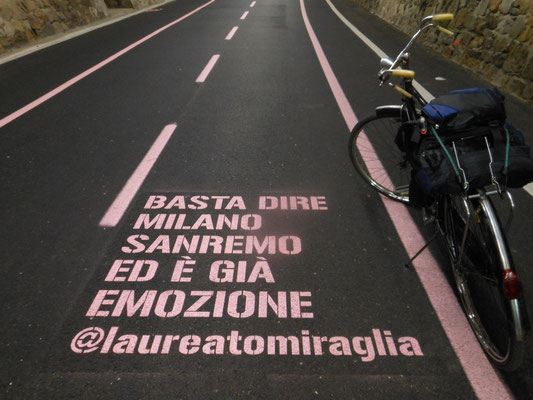 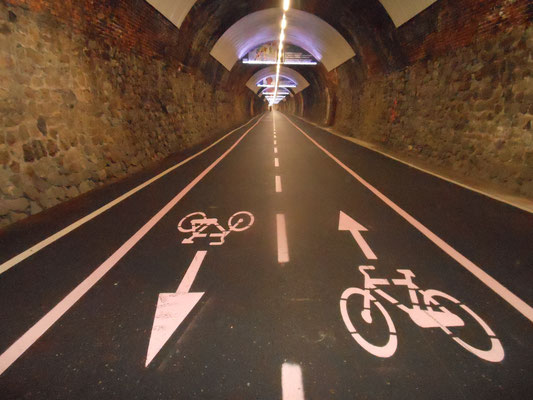 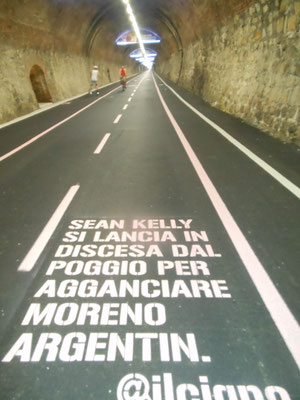 You can count on the local Italians to arrange some culinary surprises along the way. Around Bussana, east of Sanremo, you can stop for a refreshing ice cream or a snack at Bar imPEKabile. The view from the terrace over the bay is incredibly beautiful. 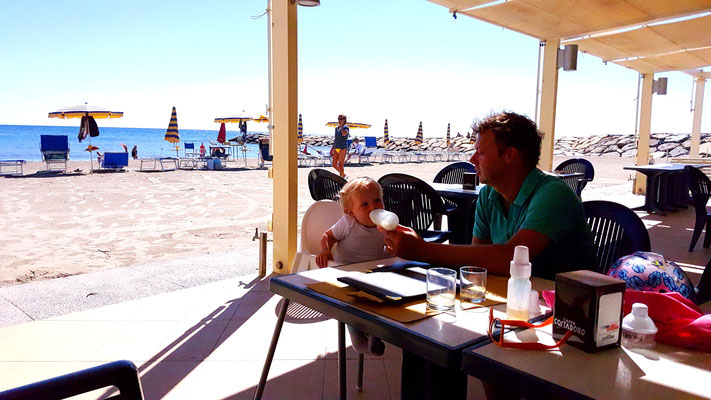 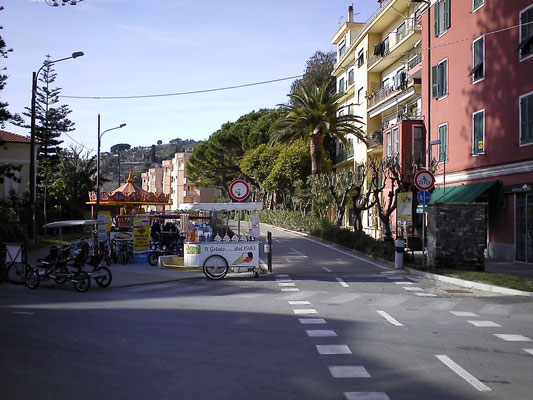 For lunch we recommend beach bar Baia Azzurra in Santo Stefano al Mare, where you can enjoy delicious, fresh fish dishes with your feet in the sand. Just treat yourself on an extensive lunch and don't hesitate to order a desert... with all this cycling activity, you don't need to worry about vacation weight gain.